In 1981 Ardgowan Hospice was born. The idea of a local hospice in the area stemmed from a number of Doctors and Nurses who felt that cancer patients were not getting the attention they needed in busy wards. The Ardgowan Hospice Support Group (now known better as the Friends of Ardgowan Hospice) was founded and so began our history in Inverclyde. In a display of determination and passion, they soon secured the old Greenock Eye Infirmary building for a base and began fundraising and campaigning in earnest. It wouldn’t be long until the first nurses were appointed. From there our services and facilities blossomed – from Patient Transport to Day Therapies, from Child Bereavement sessions to Community Nurse Specialists, from Shops to our Access building; everything we do and are in 2021 all leads back to that wonderful group in 1981.

Regular donations help us plan our services into the future. They help us improve and adapt current services and explore and create new ways to help our community. On this page you’ll read Andy Malcolmson’s story and his experiences at Ardgowan Hospice’s Men’s Group. I am so very grateful that Christine took the time to share his story with us. A gift today can help us provide spaces and groups for more people like Andy. Ardgowan Hospice was born through fundraising and campaigning, and continues to thrive thanks to it. For 40 incredible years, Inverclyde has time and time again, supported, helped, and carried their hospice. We know that with your support we’ll be there for 40 more.

My 007, Andy. Now facing his most difficult mission ever: Cancer and terminal diagnosis.
– by Christine Malcolmson 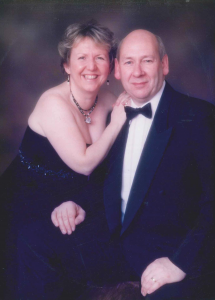 My husband Andy and I were on holiday in Bali when he developed abdominal pain. After returning home to London he went to see his GP where they initially thought he had gallstones. Fearing something more sinister, a consultant carried out a range of tests and examinations.

We had discussed that the pain may be cancer but when we went to get the results the last thing we expected was to be told that he may only have six weeks left to live. Our world fell apart, he was only 59 and we had so many plans of what we were going to do in our retirement.

Three years previously we had bought a house in Inverkip with plans to travel in winter and spend summers in Scotland once we had both retired. This was not part of our plan, we felt totally bereft.

His primary cancer was thought to be in his appendix and had spread to his peritoneum. We were referred to our local hospice in London and he began palliative chemotherapy. He tolerated the treatment well, but we were travelling from where he was having his treatment in London to our house in Scotland so started to explore the possibility of transferring his treatment closer to home.

This was when we were introduced to Ardgowan Hospice and the Men’s Group.

The Men’s Group offered Andy a place to meet, connect and share advice with others who could relate with his experience. He was initially a little reluctant to attend the group, but with the help of an Ardgowan Hospice Clinical Nurse Specialist we persuaded him to give the group a go. The Nurse took Andy down to meet the group who were extremely welcoming and invited him to join them for a cup of tea and some of the wonderful home baked cakes from the hospice kitchen.

He started looking forward to the Friday group and would come home upbeat with a renewed determination and a list of things to do and places to visit. I would ask him what they talked about and he’d say “anything and everything,” never giving any secrets away, or reply with a cheeky “how to stop your wife nagging” with a twinkle in his eye.

The group really helped him cope with his terminal diagnosis. He felt so supported by the group and the staff at Ardgowan. The level of care Andy received from the team was unbelievable. You were made to feel that they were there to support you through your journey, nothing was too much trouble.

Andy’s prognosis was just six weeks, but due to his determination (he wasn’t going to give up without a fight) and the support we both received at the hospice he exceeded that time by 2 years and 2 months. I will be forever in their debt.

Andy was a man with a full life to lead who just happened to have cancer. The illness did not define him – his family, friends, and everything positive in his life did that. The hospice helped to ensure that Andy was able to lead a full and enjoyable life around his treatment. Illness limited our travel plans but it didn’t completely stop them.

His memory lives on not just in my heart but in the shape of a gold leaf on the memory tree in the hospice day room where the Men’s Group used to meet. He remains an honorary member of the Men’s Group.

You can help Ardgowan Hopsice support people like Andy and Christine by making a one off or regular donation. To make a donation, click here.

← Back to Latest News